What happens when the Rump gets caught on a branch?

The Rump is held on by three straps with a loop attaching to the saddle and a piece of Velcro™ attached to 3 D’s on the Rump.

I have designed the Rump so that, all things being equal, it will break free and be left hanging on whatever it caught on.

I can honestly say I have tested it sometimes on purpose (just to make sure it works) and when I have mis-judged turn on the forehand through a gate. On every occasion, the Velcro™ pulls apartand left the Rump hanging on whatever it caught on.

I also ride through woods but have not found branches to be a problem. I had the idea for the Rump 2005 have used it all through the proto-type process sorting out what worked and what did not. The Rump has been test ridden by various friends, and to-date the worst that has happened is my prototype Rump ripped apart but to be fair it was made on a dressmaker’s sewing machine and I had altered and re-sewn it several times.

However, horses are unpredictable creatures and nothing can be guaranteed; I have not yet found a rug that cannot be ripped to shreds.

How does the Rump attach to the saddle?

Can a Rump be used with a harness, a roller, surcingle or over a rug

Yes, please let me know as you will need a longer centre strap. I have used Parsons Rump as a stand alone hi-viz item on my horse but I strongly recommend the Rump be used as part of a complete ensemble. 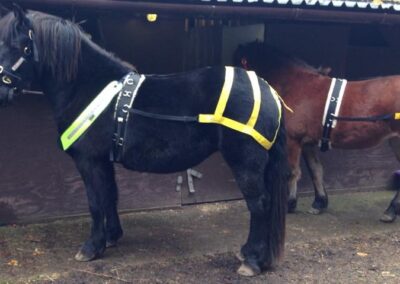 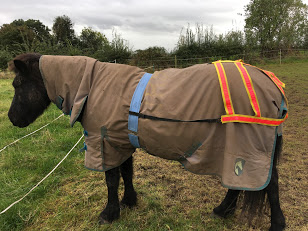 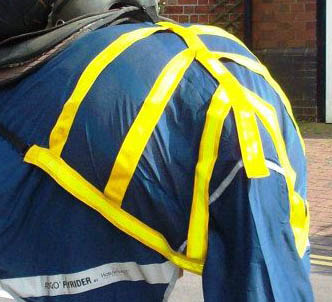 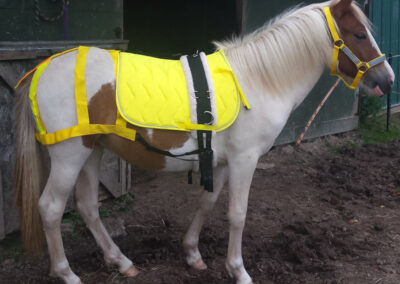 “Does the Rump get blown about in the wind?”

No, in all the years I have ridden in a Rump I have never found this to be a problem. Just a footnote from me for those of you that buy a Rump and add extra Hi-viz yourself, please be careful what you use.

Look at the picture and what do you see first? I see the yellow stripe on the riders T-shirt. The reason? The proto-type rump is covered in 25mm light reflective tape (the grey tape), for use at night and I found it camouflaged the horse during the day and did not give the desired effect.

I use Reflexite® tape as it is flourescent by day and reflective by night, there are cheaper alternatives but not for me and my horse.

I have used Parsons Rump without wearing any other Hi-Viz; however in this day and age of busy, tired drivers who are perhaps not paying full attention to the road can I strongly recommend that Parsons Rump is used as part of a complete Hi-Viz ensemble. I'm fine with this

We use cookies to give you the best online experience.

Please let us know if you agree to all of these cookies.

Some of the cookies we use are essential for the site to work.

To control third party cookies, you can also adjust your browser settings.